Note: You are not logged in.
Remove Effect Tag Extension

Description: Via the use of a single effect tag REMOVE: this extension allows players to remove effects that have been applied by them to either their own PC or other creatures (friendly, neutral or hostile). If the player has applied the effect, they can remove that effect through the use of this extension. Included in this extension is the STACK: and MULTI: tags to allow multiples of the same effect to be applied for various purposes.

To remove an effect from yourself or another creature in the combat tracker, simply make an effect with the tag 'REMOVE: ' followed by the full name of the effect to be removed. For instance, to remove the 'Sneak Attack; DMG: 1d6' effect, you would make an effect called 'REMOVE: Sneak Attack; DMG: 1d6'. Then you just apply the removal effect to the target. A special button represents the removal effect and will appear once you have typed REMOVE. The effect is case sensitive so make sure the REMOVE: entry matches the effect application entry exactly - the best way to do this is to copy the effect line and paste into the REMOVE: entry.

NOTE: The creature with the effect must be targeted to remove it. If you are using effects with a target of "SELF" then the removal effect must also be set to "SELF".

The removal tag searches the target for an effect with the name indicated after the 'REMOVE:' and removes it.

For effects that you need to keep a count of, use the 'STACK:' tag. Applying the effect will add one to the stack rather than adding a new effect. This tag works with the REMOVE tag so you can remove one from the stack by using the 'REMOVE: STACK:' tag.

For effects that you need to apply multiple times, use the 'MULTI:' tag. Applying the effect will add the effect preceded by a number and semicolon. (This causes FG to view it as a unique effect.) The MULTI tag is best used for effects that expend as soon as they are rolled, as the effects cannot be removed with the REMOVE tag. 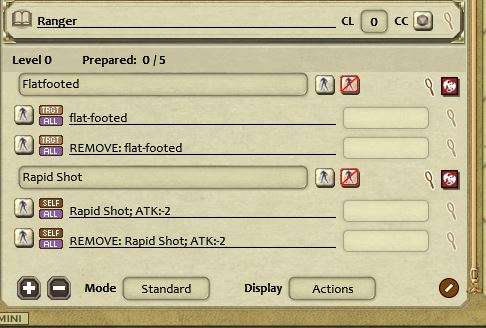 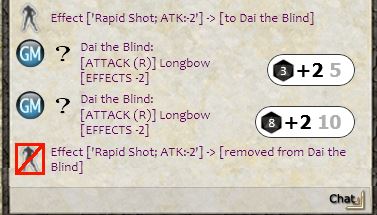