Note: You are not logged in.
Feature: StrainInjury plus extended automation and overlays

How to activate: This is an extension for 3.5E/PF1; download it from the forge using the update button in the Fantasy Grounds Unity launcher after subscribing to this item using this website; afterwards, before you launch your campaign, turn on Feature: StrainInjury plus extended automation and overlays in the extension list of your campaign.

For fellow developers: My GitHub profile is at https://github.com/Kelrugem; the extension installs into the /extensions directory, and its file name is StrainInjury with Full OverlayPackage.ext.

This extension adds overlays for wounds and saves (see below), and there are different versions for these overlays:

Hence, same description as for the extended automation extension:

This is a somewhat big extension, adding a lot of features, so, be aware of possible incompatibilities with other extensions. Furthermore, at the bottom of this page you will find a list of examples of effects :) In order to use this extension it is recommended to know the basics of effects in Fantasy Grounds. For general information about effects see e.g. here: 3.5e/PF1 effects' wiki.

Compatibility with the effect builder by SoxMax

Automatic application of the effect "flat-footed" on combat start (originally by mr900rr, thanks :) ):

There is a new setting in the campaign options (in Combat (GM)):

Its value is off as default. If turned on and if the round tracker in the CT is at 0, then every combatant in the CT will get automatically the effect flatfooted after rolling initiative (every option for rolling iniative taken into account); the effect will have suitable durations such that it expires when the actor has its first turn (except maybe the very first one when that actor is already the active combatant in the CT, so, make sure that there is no active actor before the combat starts (by e.g. clearing the initiative first and so on)).

Thanks to Bmos: There was a separate extension by Bmos catering for the advantage on melee miss chance rolls, if having the blind-fight feat. I incorporated this and expanded it to the full automation of Blind-Fight and Uncanny Dodge. How it works: Add Blind-Fight to the feat list of the (N)PC (do not forget the hyphen), and Uncanny Dodge (or Improved Uncanny Dodge) to the class abilities for PCs and to special qualities for NPCs. Blind-Fight gives advantage on melee miss chance rolls and negates the bonuses of melee attacks made by invisible creatures (so, no +2 and no combat advantage for the attacker). Uncanny Dodge negates own flat-footed effects and the flat-footed modifier button, and it negates the attacker's combat advantage, if the attacker is invisible or has pressed the flat-footed modifier button

Furthermore, (Improved) Uncanny Dodge negates the automatic apply of flat-footed (if turned on in the options; originally by mr900rr, see above; thanks :) ).

There are several new modifier buttons: Advantage and Disadvantage ones in the category "General". These give advantage and disadvantage, respectively, to the next roll, regardless of any (dis)advantage effects in the CT.

Additionally, there is also a Combat Adv. (Combat Advantage) modifier button in the "Attack" category. This negates Dex and dodge bonuses to the target's AC and negates dodge bonuses to reflex saves if one rolls the save manually from the sheet. So, this button is similar to the Flat-Footed button, however it won't get negated by Uncanny Dodge (see above).

The StrainInjury version of this extension also contains an Injury modifier button in the "Damage" category. This will designate all damage dice as injury damage and automatically adds the new damage type injury (see below).

If certain native effects like HEAL are listed here, then this is due to that these are extended in some sense; the following tables follow the style from the wiki, 3.5e/PF1 effects' wiki.

* These effects are still in some sort of test mode, they will certainly not work correctly for damage rolls when damage types are important (if they’re not, then feel free to use that effect with damage). At the moment this effect will affect every roll, whatever it sees first, thus, combine it with ”Expire on next roll” and apply it just before the roll which should be affected to avoid that this effect affects other things, too :) See below for advantage effects just for certain actions

†A note about REVERT with respect to heals: It won't automatically cater for crits, and also not for injury damage if a failed save happened (for StrainInjury version of this extension); these have to be handled manually right now.
Reverted heals count as damage rolls having the damage types positive and spell.
REVERT regarding damage rolls: I found it the most natural that REVERT is checked for after all damage effects affecting damage rolls are checked. Therefore, effects like IMMUNE and HRESIST lower the incoming damage roll and then the damage roll becomes a heal.

IFTAG and NIFTAG can be combined with all effects affecting spells and actions.

One can also combine numbers with the letter tags like in [H3STR]; first the letter, then the number, as for the new d tag from above.

Extended overlays for saves and wounds/death (original idea by Ken L, thanks :) ):

There are also other two settings in the campaign options (in Overlays) for save and failure overlays, defaulting to off. Turning these settings on will activate an automatic application of several overlays, see the attached screenshot, too. The wound/death overlays are self-explanatory, I think; the save overlays are three different ones, especially three colours showing a certain result of a save roll:

The save overlays will be erased when the turn or round changes, but you also see new buttons in the toolbar. With these buttons you can erase either the wound or save overlays. By erasing the save overlays you can start a new spell action with the same target and still profit by the overlays before the overlays got automatically erased by a change of the round/actor.

Note: You can also use the clear overlay buttons every time the overlays may not be applied, this should reset their behaviour. (It can happen after a reload of a campaign that overlay information is saved (as expected) but not shown after the reload; this can lead to that overlays are not rendered at all until something resets their behaviour like the buttons or a change of round/actor (latter with respect to save overlays)).

All the cycle buttons with CL, even CL and odd CL (or more) now also have CL/3 which simply uses CL/3 (rounded down and minimum 1) as a number.

Additionally to the typical and the temporary heal option, the cycle options of the heal button now also offer healing options for nonlethal or strain damage (without StrainInjury or with StrainInjury, respectively). Thanks to Bmos :)

Depending on your "Remove on Miss" choice in the options targets are now also removed on misses due to miss chances like concealment, incorporeal and so on.

Both boxes can be adjusted manually.

The first box is the number of already made AoOs, thence, it is 0 by default and it resets always to 0 at the end of one's turn. If you make an opportunity attack (by pressing Shift while attacking or pressing the opportunity button in the modifier window) this number is automatically increased by 1.

The right box is the maximum number of allowed AoO per round and is by default of course 1. If you add an NPC to the CT (and only then) which has the feat combat reflexes, then this number is adjusted correspondingly. For PCs you have to do this manually.

Note: The maximum number does not restrict the number of the left box or your ability to make AoOs in order to avoid that this automation comes into your way.

A bit more logic in general:

If you have several effects like VULN, RESIST etc. affecting some damage type, then the order of application is (for 3.5e)

For Pathfinder VULN is applied before HRESIST. FG has usually the following order as reference:

Started to improve the parsing of NPC effects once added to the CT. Magic immunity will also parse an additional SIMMUNE effect, and immunity against charms, poisons and so on will not parse the typical informational IMMUNE effect anymore; instead there will be a collected IFTAG: [...]; SIMMUNE effect at the end of the effect's string.

For 3.5e: Added parsing of immunity against sneak attacks.

I also made a major rewrite of how damage types are treated. Do not worry, if you use standard rules, nothing changes. The following is just for an easier implementation of homebrew rules and other source books with "that one rule/effect which was never there before". Effects like RESIST already support arbitrary damage types but it doesn't work well for non standard situations. E.g. RESIST: 5 slashing works but it also still applies to daggers although the attacker could use the piercing damage type of the dagger instead. RESIST: 5 piercing and RESIST: 5 slashing also stacked in the standard FG code. And lot other things. To handle these my aim was to make the code more universal. Moon Wizard wrote

about how immunity is applied, according to the rules. With this extension this also applies to HRESIST, RESIST and FORTIF. The way how FG defines basic damage types and the attribute ones in such situations is the following table (including the new damage types of this extension):

IFTAG: spell; SAVE: 2 racial (+2 racial bonus against spells)
IFTAG: spelllike; SAVE: 2 racial (+2 racial bonus against spell-like effects, remember to not use the - in spell-like)
IFTAG: poison; SAVE: 10 insight (+10 insight bonus on saves against poisons, poisons are not automatically parsed in the tag lines. You have to add them on their own such that FG will know which action corresponds to a poison)
IFTAG: spell; IFTAG: evocation; SIMMUNE (immunity versus spells of the school evocation)
IFTAG: spell, illusion; DC: 3 enhancement (+3 enhancement bonus to the difficulty class of spells and illusions in general, so, also spell-like illusions would be affected by that or anything else with the tag illusion, not only illusion spells. The comma between tags is like a logical (inclusive) OR)
IFTAG: spell, spelllike, poison; SAVE: 2 racial (+2 racial bonus against spells, spelllike abilities and poisons as for dwarves)
DMG: d10 fire, critical, vorpal (flaming burst which ignores crit immunity such that mummies burn even better)
NIFT: CUSTOM(seeking); invisible (treated as invisible except against combatants with an informational effect seeking, useful for stuff like true seeing)
NIFT: CUSTOM(seeking); CONC
NIFT: CUSTOM(seeking); TCONC
fortune; must decide before the first roll is made; keladvantage (Witch's fortune Hex, set to expire on one roll)

Sneak as a set of effects on the rogue
NIFT: nodex; DMG: 3d6 precision, accuracy
IFT: nodex; DMG: 3d6 precision
(The first effect is a sneak attack which only activates if using the accuracy modifier button or pressing Ctrl while rolling damage and only if the nodex does return false. If nodex returns true, then the second effect caters for the sneak attack. Due to NIFT and IFT no stacking arises)

Note about the sources of the graphics (in both versions of the overlays): 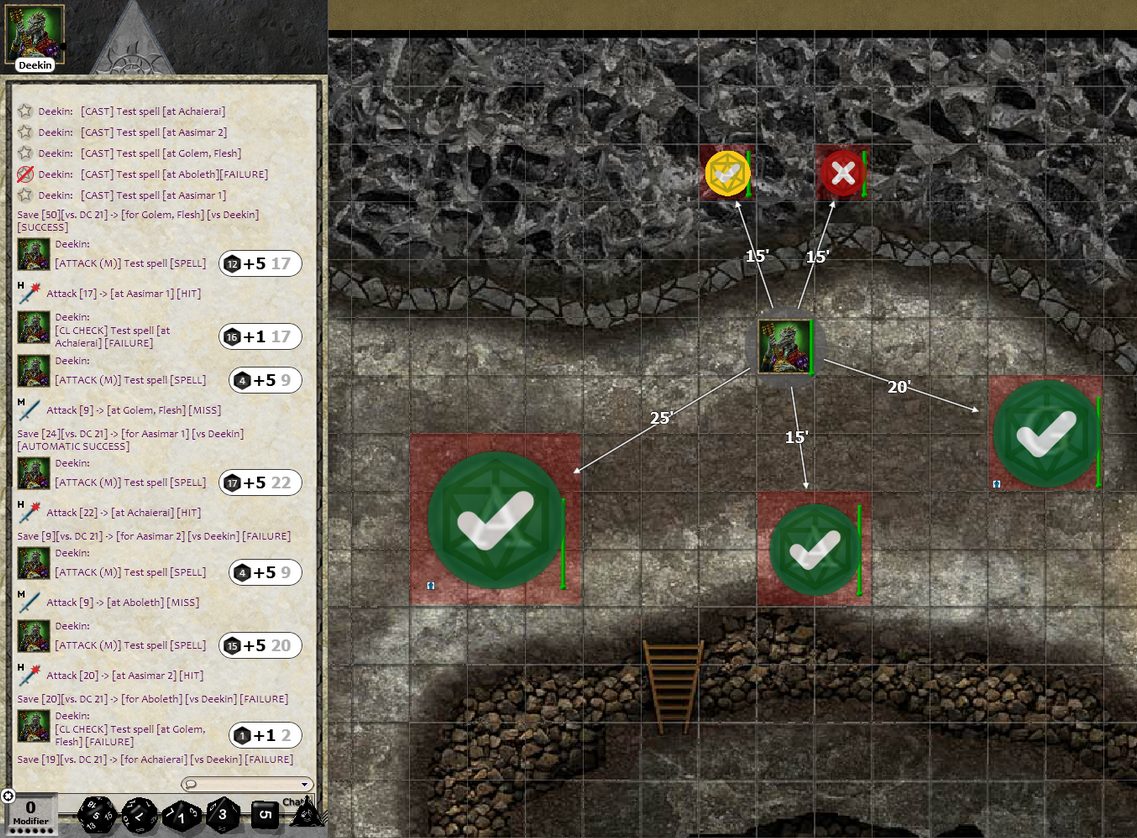 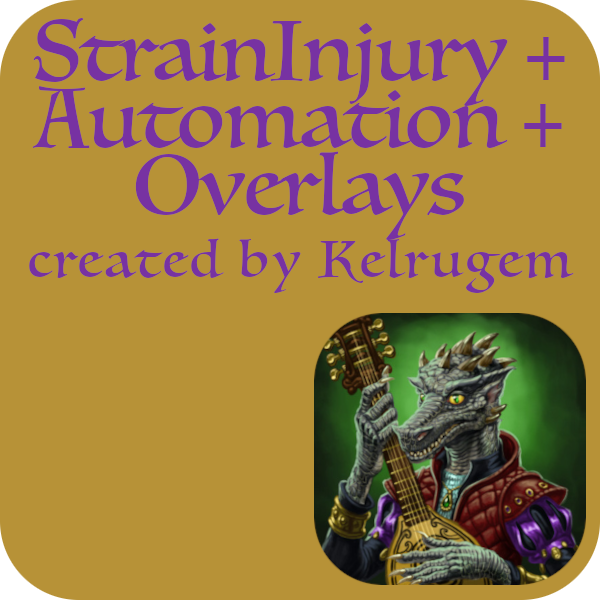 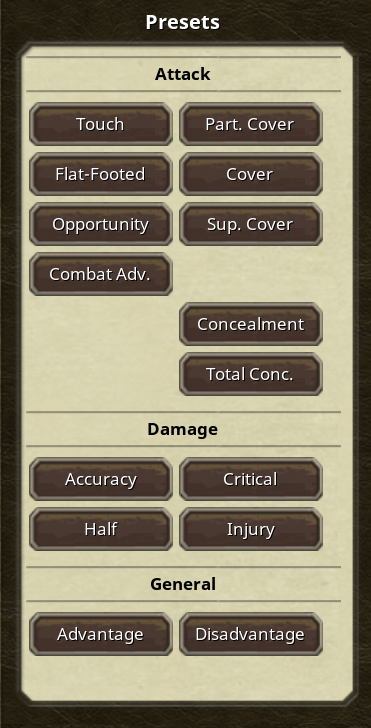